Noise is defined as 'unwanted' sound. Humans are very sensitive to sound and can hear sounds that vary in acoustic energy from the whining of a mosquito's wings to the racket of a jackhammer. Sound levels vary so greatly in magnitude that it is impractical to describe their sound pressures in familiar linear units. Sound pressures are therefore measured on a logarithmic 'decibel' (dB) scale. A 'weighting' of the sound level is widely used in measurements of environmental sound to ensure electronic instruments match the sensitivity of the human ear across the audible spectrum. Hence the notation 'dBA '. 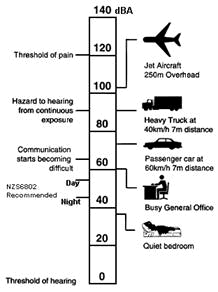 Text description of figure
If the dBA scale is applied to everyday activities then 0 dBA would be so quiet that the human ear would have problems detecting any noise. A quiet bedroom by contrast would generally have a noise level of a little under 40 dBA and a busy office 60 dBA. At around 65 dBA verbal communication starts to become difficult. A heavy truck travelling along a road close to where the noise is being measured may produce 90 dBA, a level of noise that may present a hazard to hearing if people are continuously exposed to it. Older style, or large jet aircraft may produce more than 100 dBA, while 120 dBA represents the threshold of pain.

Noise from land use activities is measured and assessed for its potential impact using the measurement units Lmax, L10, L90, and Leq,T (all expressed in dBA values). These units are defined in NZS 6801: 2008 Acoustics - Measurement of environmental sound.

Maximum permissible noise levels are specified in terms of the L10 criteria in most district plans and in the 1991 New Zealand Standards (NZS) dealing with noise (eg NZS 6802: 2008 Acoustics - Environmental noise). The L10 unit is used as it is seen as a good predictor of human annoyance at sounds in the environment. However, in New Zealand there has recently been a move to specify environmental sound using the Leq,T unit (which is more aligned with international practice).

In addition, Lmax limits are applied during night-time in residential areas to control loud single events that can interrupt sleep. While noise limits may vary slightly among the towns and cities of New Zealand, these types of noise rules are widely adopted and represent current practice.