District plans can promote greater integration between land use and transport, by incorporating provisions that provide for both strategic and detailed site-specific assessment. This includes:

A district plan can also include methods (including rules) to manage the specific environmental effects of activities such as:

District plans are primarily a means of regulating activities to facilitate or control land transport (but see section below on other methods that can be included in RMA plans). Territorial authorities are also able, under the LGA 2002, to:

Road hierarchies classify types of roads in the region/district, and their priority in terms of function. The highest class relates to arterial roads such as motorways and state highways, while the lowest includes local roads and cul-de-sacs. Each classification assigns preferential use to either through traffic or local access. 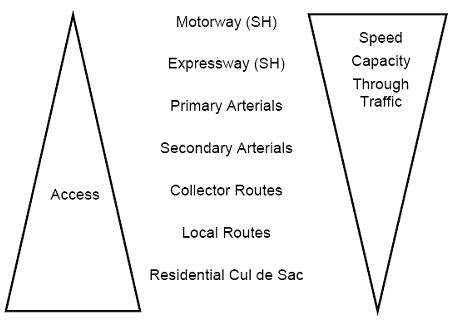 There is an argument for moving away from a hierarchical road system to one that is:

Nevertheless, the current convention is to rely on road hierarchies for planning purposes.

Road hierarchies are a means of managing the district transport infrastructure (and more particularly to control access to the highest levels of the road hierarchy). They can be useful in achieving a balance between movement and place making and as an environmental management tool to assist in controlling effects (e.g. noise and amenity protection). A graduated hierarchy can usefully help establish policies and rules relating to:

Where a designation is provided in a plan, any provisions that might normally apply - including zoning and land use controls - do not extend to works or projects undertaken by the requiring authority. This can include routine maintenance and minor upgrading.

In general, designations are an effective tool for major new transport developments such as arterial roadways. However, zoning provisions can also be used in conjunction with or instead of designations to provide for transport corridors and networks. In such cases, the district plan generally permits activities like the construction, operation, and maintenance of roads, although certain thresholds and performance standards may apply. Other non-roading activities may still require resource consent, such as the location of bus shelters and removal of protected trees.

There are several issues to consider when deciding whether to use zoning or a designation. These include:

Councils, Ministers of the Crown (e.g. government departments), and approved network utility operators (e.g. NZTA) are requiring authorities and can lodge a Notice of Requirement to designate their transportation networks in district plans. NZTA uses designations to manage the State highway network. The national rail network is also designated.

Future lineal transport infrastructure routes such as road, rail, pedestrian, cycle and rapid transit corridors may also be identified in district plans (particularly for future growth). Commonly these would be provided for by either designation or by indicative routes where insufficient detail is available on the exact location or configuration of the route. There are, however, location and timing issues associated with this latter approach. Potential noise, visual and air quality effects would also need to be recognised.

As a way of reconciling strategic land use and private development goals, local authorities sometimes use indicative roads as a means to negotiate the location of transport routes at the time that a subdivision is proposed. Structure plans are another way of achieving such outcomes, but have the long-term roading pattern often embedded into a district plan to direct future development.

Unplanned or uncoordinated land use decisions can affect the safety or level of service of the transport system. Consequently, the impacts of land use on transport interests should be considered prior to land being identified for growth, subdivided or developed.

When preparing a plan, consideration should be given to including objectives, policies and possibly rules that cover such matters as:

Generally all existing district plans contain transport-related standards or controls (e.g. access, parking). When carrying out a review, careful consideration should be given to these provisions as some may no longer be effective or desirable. Council officers (e.g. roading engineers, consent planners) who regularly work with these standards should be consulted about the effectiveness of existing provisions. It may also be helpful to survey the views of the plan from external users (e.g. roading consultants, the NZTA, consultant planners).

Long Term Plans under the LGA can also play an influential role in transport-related decisions as they outline the levels of service to be provided by a territorial authority (e.g. travel speeds and times on roads).

Vehicle accessway specifications should be tailored to the particular situation, but in general they should:

Parking controls can be used to:

Parking controls can be difficult to determine and administer as parking needs vary greatly for different activities. As provisions may need to be adjusted in response to land use changes, it is important to ensure that any changes are closely monitored (e.g. rules may need to address supplementary provision where 'vehicle generating' activities are proposed).

For instance, it may be more efficient for a council to provide bulk parking in one location instead of multiple small parking lots through a centre. Consideration could also be given to allowing 'shared' parking between activities where possible (e.g. multi-unit shopping centres). Such policies should be developed through an integrated planning exercise. Other policy issues to take into account include management of potential adverse effects.

The NZTA is responsible for traffic control signs within state highway road reserves. The industry-recognised Manual of Traffic Signs and Markings (MOTSAM) is a useful source for definitions of road and traffic signs. Note this manual is being progressively updated with the Traffic Control Devices Manual.

District plans commonly establish noise standards for land use activities. With existing transportation networks, it is also relevant to consider how 'reverse sensitivity' might be addressed (e.g. where a noise-sensitive activity such as housing establishes near an existing noisy environment like a motorway). Refer to the Land Transport Noise QP Guidance Note for more detailed information on options to manage land transport noise.

Air quality is a particular issue for communities affected by transport networks experiencing congestion and in areas where existing air quality is poor. Generally free-flowing traffic produces fewer emissions than congested traffic. Although transport emissions are usually assessed on a national basis, location-specific effects have been considered in certain circumstances.

Consideration should be given to applying controls such as separation and sight distances near railway level crossings to ensure road users have a safe line of sight.

Although earthworks and stormwater discharges are generally managed through regional plans, they are also addressed in some district plans. As these activities have the potential to adversely affect the development of the transportation system, unnecessary duplication of controls in regional and district plans should be avoided.

Where specified in a plan, financial contributions can be imposed to avoid, remedy or mitigate adverse effects on, or the effects of, land transport modes. Contributions can be in the form of cash, land or a combination of cash and land. They can be used to recover the costs of providing upgraded or additional public transport infrastructure associated with new development.

The NZTA may also seek to enter into cost sharing arrangements for state highway improvements directly related to development (refer NZTA Cost Sharing Policy). These may include contributions of land, works or money from developers, councils and other relevant parties (if appropriate) to mitigate the adverse effects of new development on the state highway network.

Other activities on roads

Other activities on roads include car races, cycle races or parades. Although these activities are generally temporary in nature, they can occur on a reasonably regular basis and can affect both the transportation system and activities on nearby sites. They are often regulated through by-laws or are treated as temporary activities (with allied controls) in plans. Transport Agency approval also needs to be sought if access to a state highway is required.

Provision for associated roading-related structures such as bus shelters and utility infrastructure should also be considered.

Other methods (associated with the district plan)

Consideration should be given to the use of other regulatory or non-regulatory methods to implement district plan transport policies, provided they align with and support transport provisions in the plan.

Other methods to achieve councils' objectives outside the district plan include: