For the purposes of this document, winegrowing refers to activities associated with the cultivation of grapes for wine in a vineyard. This process is also referred to as viticulture. Winegrowers are those that undertake the activity of cultivating grapes for wine.

Grape marc is the residue left after the grapes have been pressed. It consists of grape skins, stems and leaves.

Photo of grape residue, including skins, stems and leaves 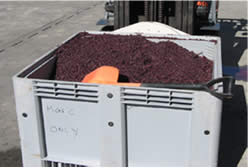 Protecting horticultural and viticultural crops involves techniques that can include the use of audible, visible, or physical means to discourage or frighten birds away from crops. The birds may be frightened by something new and unusual in their environment (eg, flashing lights or strange sounds) or by something that simulates a threat (eg, a gun or predator). Another option to protect crops from bird feeding is netting. Every situation is different, and techniques that work well on one site may not work at another; and different bird species may not react in the same way to a particular control option.

Photo of a gas gun in a vineyard 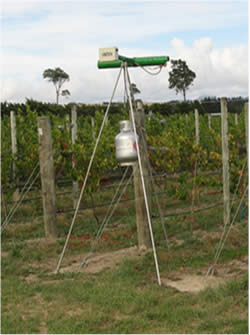 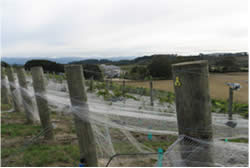 For the purpose of this document, frost-protection devices are devices that are used to move air to reduce the risk of damage to crops from frost.

Frost-protection devices may either be permanent, consisting of a fan mounted tower, or helicopters may be used for frost control.

A radiation frost begins at ground level and gradually rises, and occurs when clear skies and calm winds result in there being no barrier to prevent heat loss from soil and plants. When the ground cools during radiation frosts an upper air layer, or inversion layer, will be warmer than the air that is closer to the ground.

Wind machines and helicopters capitalise on the development of an inversion layer in a radiation frost. Their purpose is to circulate the warmer air down to crop level.

Heaters (Return Stack Heaters) emit hot gases from a stack which creates convective mixing in the crop area, tapping the important warm air source above the inversion layer. A definition is provided below for “Return Stack Heaters” and “frost pots/smudge pots”. Please note, these definitions are only for the purposes of this document.

Except for helicopter landing areas, the management of helicopter movements is typically outside the jurisdiction of local authorities, as they are controlled by Civil Aviation requirements. Requirements include, for instance, minimum safe operating height and weight limitations.

Return stack heaters (“Smokeless heater frost fighting device”) are easily identified by both its chimney stack and the pipe connecting the stack to its oil pan. They work by burning oil within an enclosed metal bowl structure. The unburned oil is captured in a tube and returned to the bowl to burn again. Hot gas emissions discharge through a chimney stack and create convective mixing in the crop area. Note that Return Stack Heaters are not covered by the NES for Air Quality. 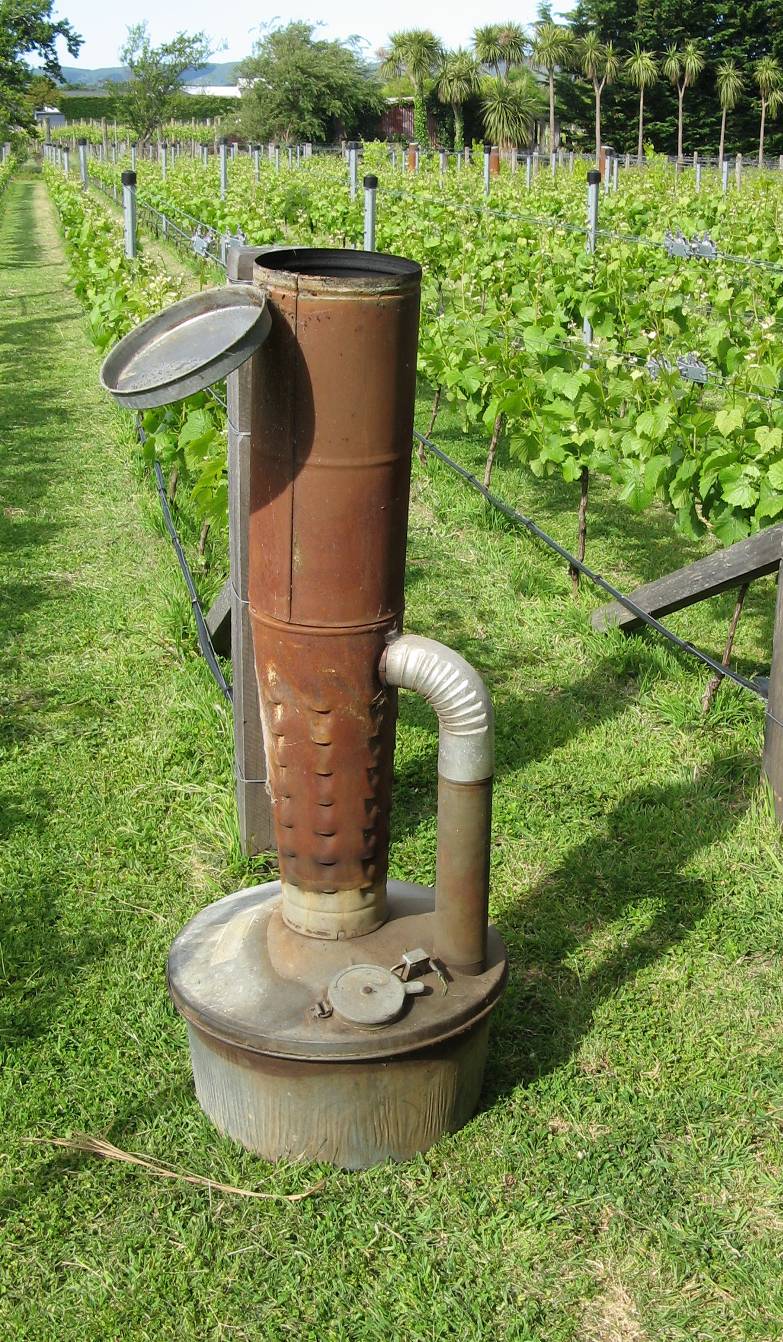 For the purposes of this document, frost pots and smudge pots are a type of frost protection heater that essentially burns oil (or diesel) in open pots. These heaters do not contain a chimney or return stack pipe, and in most cases they work by producing smoke (rather than heat) to prevent frost from settling. These frost pots/smudge pots are prohibited under the NES for Air Quality. 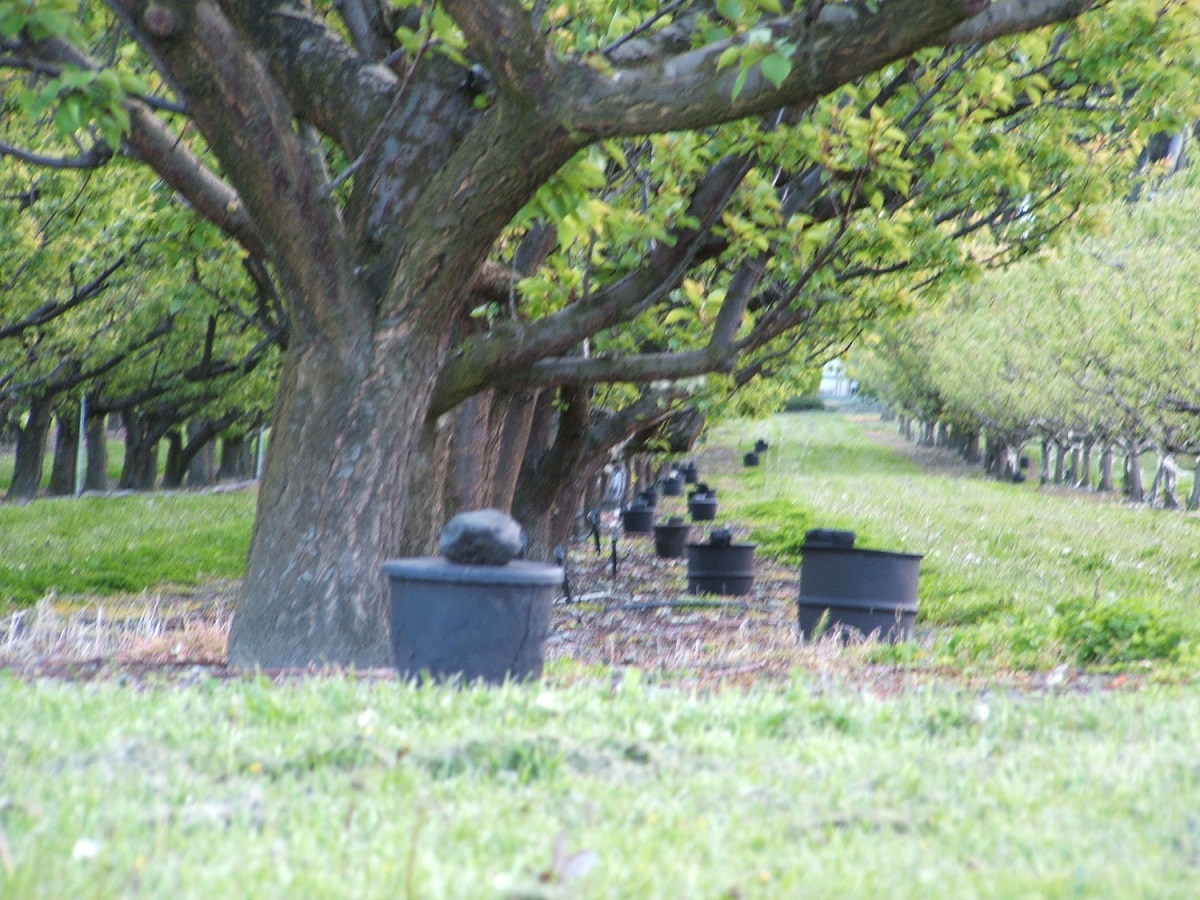 Overhead sprinkler irrigation is where water is sprayed continuously over the vines and ground. When the air temperature surrounding the vines drops below freezing, the water freezes on the plants. The latent heat of water when it freezes is the principle involved in protecting the plant.