An enforcement order is similar in some respects to an abatement notice in that it is used to require a person to cease doing something that contravenes a rule in a plan, requirement in the RMA, or that is dangerous, noxious or offensive. It can also be used to require and offender to do something necessary to ensure compliance or avoid, remedy or mitigate adverse effects.

Unlike abatement notices, enforcement orders are issued by the Environment Court (refer sections 314-319 and 321 of the RMA). As set out in s4(6) of the RMA, an application for an enforcement order can be made against an instrument of the Crown but only if:

Enforcement orders offer more options than an abatement notice, including the ability to recover clean-up costs incurred or likely to be incurred in avoiding, remedying or mitigating any adverse effect on the environment. The Court may also order restoration of a natural or physical resource. Where the offender has failed to comply with an order, the local authority, with the Court’s consent, may go ahead and comply on the respondent’s behalf (and recover the cost of doing so under s315 of the RMA).

It can be useful to begin enforcement order proceedings to alert offenders to the seriousness of their actions and make them more amenable to solutions. If a problem or the options to resolve it are complex, enforcement proceedings provide a Court-supervised procedure for bringing about a conclusion, and if problems are encountered during the implementation of the solution, the parties can return to Court for direction.

Scope of an enforcement order - s314 of the RMA

Whether an activity is objectionable or offensive enough to warrant an enforcement order under section 314(1)(a)(ii) of the RMA should be tested objectively. For example, in Zdrahal v Wellington City Council [1995] 1 NZLR 700 ) the High Court held that the following factors are relevant:

Further information about recovering costs relating to enforcement action, is contained in the guidance note Enforcing Plans and Consents.

Procedure for enforcement order application - s316-318 of the RMA

The procedure for making an enforcement order application is set out in s316 to 318 of the RMA. This procedure is summarised the diagram below and the text following the diagram provides an explanation of the stages. 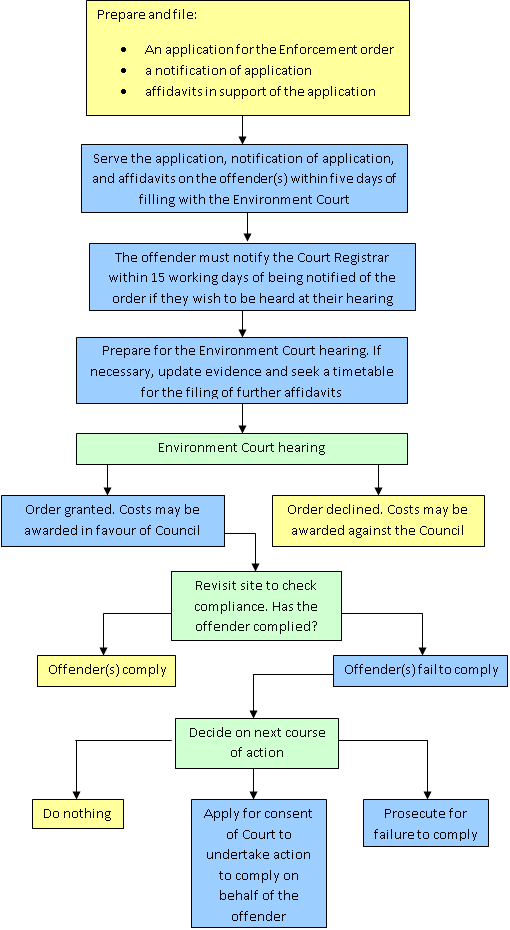 Preparing and Hearing an Application

Before deciding an application for an enforcement order, the Environment Court must hear the applicant and any person against whom the order is sought who wishes to be heard, provided that person has given the Court 15 working days notice of their intention to be heard.

Enforcement orders must be written in precise terms that are capable of enforcement and should not contain information that is debateable or conjectural.

Decision on application including defences - s319 of the RMA

Section 319 of the RMA provides that, after hearing an application, the Court can refuse the application or make any of the orders outlined in s314 of the RMA. The Court has discretion to refuse an order even when the grounds are made out.

For the Court to have jurisdiction on an enforcement order, there does not need to be a high degree of adverse effects on the environment. For example, in AMP v Gum Sarn Property Ltd [1992] 2 NZRMA 119, the Planning Tribunal dealt with a private application for an enforcement order. The Tribunal held that if the local authority does not enforce its plan and a member of the public seeks an order, the fact that the applicant is not officially responsible does not affect the Court’s discretion. On the question of whether an application for an enforcement order is weakened by the fact that the local authority has been slow or otherwise remiss in enforcing the breach of a Plan, the Planning Tribunal held the following:

The principles from this decision were upheld in Manukau City Council v Murray [2002] A084/2002 and in Wainui Environmental Protection Society Incorporated v Redvale Lime Company Limited (A90/08).

Similar questions were dealt with by the Planning Tribunal in Canterbury Regional Council v Canterbury Frozen Meat Co Ltd [1994] A14/94. The Tribunal held as follows:

The discretion to grant or refuse an order is subject to the restrictions or defences in s319(2) of the RMA:

In Balfour v Central Hawkes Bay District Council [2006] CA174/06 , the Court of Appeal noted that s10 of the RMA (existing use rights) provided an exception to the requirement to comply with district plan rules, but did not override the general duty in s16 of the RMA to avoid unreasonable noise. In this case, use of s319 of the RMA as an alternative defence failed as the Court stated that s319 does not explicitly provide for a defence based on existing use rights, but only for compliance with current rules or resource consents where adverse effects, in respect of which the order was sought, were recognised by the plan.