Climate Change and it's Effects

The climate is changing. Increased greenhouse gas concentrations have already started to affect the climate in ways that will take time to reverse. Even if significant global action is taken now to reduce these, a degree of climate change is inevitable in our lifetime. New Zealand, as a country heavily dependent on agriculture and tourism for its revenue, can expect to be affected by even small changes in climate.

We cannot predict exactly what climatic changes will occur in New Zealand over future decades, both because of uncertainties around levels of future greenhouse gas emissions and incomplete knowledge about the processes governing climate and natural climate variability. Changes in rainfall, temperature and sea level will also vary from region to region.

However, the trend of change is well accepted. For example, on average, New Zealand can expect the following climate change effects:

The Ministry for the Environment has developed up-to-date information on climate change impacts for New Zealand by region. It is recommended that councils use this information as a basis for assessing the effects of climate change, unless more detailed local modelling is available.

Further background information on climate change science and the international context is available.

What could climate change mean?

A changing climate is expected to create both opportunities and risks for New Zealand, including:

Both potential opportunities and risks should be considered when making decisions relating to climate change effects.

Climate change effects are expected to affect a number of key local government functions and operations which are outlined in further detail in this guidance note.

As a general guide, wherever current climate is significant to an activity, hazard or plan, expected future climate should also be assessed for its impact.

Councils should explicitly consider whether the effects of climate change have significant implications for:

Of particular importance, given their long-term effect, are decisions relating to:

When assessing whether climate change is likely to have a significant impact on a particular activity, hazard or plan, key factors to take into account include:

2 - Presence of a particular 'driver'. Climate change considerations are particularly important for infrastructure decisions. Any significant investment should be preceded by a risk assessment that includes climate change implications and a cost-benefit analysis. Climate change effects should be factored in to infrastructure design where the resulting asset 'life-cycle' costs are less than the expected additional costs from premature retirement of the asset or unprogrammed upgrades. In some situations, the design of new infrastructure may 'lock in' resource requirements in a way that makes later upgrading virtually impossible.

Decisions on subdivisions and developments are most usually driven by applications from the private sector. Councils are required to make decisions quickly. But decisions need to be carefully made if there is a high likelihood that climate change effects will exacerbate existing natural hazards. If such factors are relevant, and the council thinks an application has shown inadequate consideration of climate change effects, further information should be sought in preference to proceeding without that information.

3 - Location of activity. Some locations are particularly vulnerable to climate change. Decisions on significant activities near the coast should consider expected sea-level rise over the next century, as well as other consequential effects such as increased coastal erosion and salt water intrusion into aquifers. Development in flood plains should factor in potentially reduced flood return periods and greater peaks.

4 - Extent of activity. Decisions that involve, for example, a single building or a small part of an infrastructure asset (unless the latter constrains the rest of the system) are less likely to have fundamental and long-term implications than decisions that affect larger areas. The exception is where a small development sets a precedent, leading to acceptance of subsequent applications.

5 - Nature of activity. An activity may be affected by a single climate change parameter, or by complex parameters with multiple effects and implications over time. The latter can best be addressed at the policy level, with decision-making applied consistently over time. Relatively general information may be adequate to start policy development and information can be refined over time within a generic policy context. For example, in planning an urban extension, if there are options, low-lying coastal areas should be avoided, and if flood plains are being considered, higher and more frequent floods than in the past should be assumed.

Councils may find it helpful to use a series of 'decision-making steps' of increasing complexity to assess whether climate change is significant for a particular activity, hazard or plan, and how significant its impact might be. 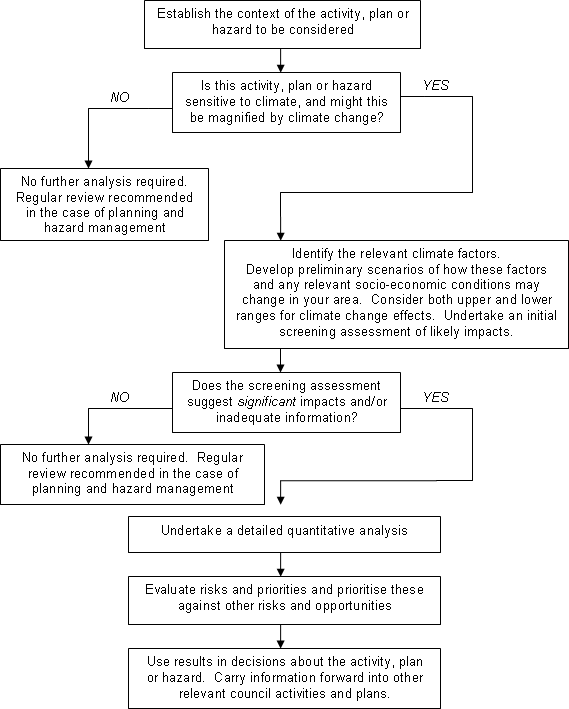 The first step is to identify qualitatively whether a specific activity, hazard or plan could be significantly affected by climate change. Special consideration should be given to activities, hazards or plans which are vulnerable at present to climate and climate variability.

If a potentially significant climate change effect is identified at this stage, a brief quantitative assessment or 'screening' analysis can be undertaken. This consists of considering the expected climate change effect (for example, a rainfall increase of between 2%-10% by 2030) and any other relevant planning variables that may change over the period in question (for example, a projected population increase of 15% by 2030), to develop scenarios in order to test quantitatively the likely significance of climate change. From this screening analysis, further analysis can be made as to whether existing planning provisions and/or hazard management responses have a sufficient safety margin to cover any resulting change in risk or resource availability.

If it appears that existing provisions/responses do not adequately cover the future change in risk, a more complex technical risk assessment can be undertaken, followed by an analysis of response options to manage the risk over appropriate timeframes.

Climate change is not a stand-alone issue. Councils already consider and respond to climate and climate variability as they develop plans, mitigate risks and provide services and facilities to the community. Climate change considerations will therefore not drive or initiate local government action on their own. Rather, they may modify an outcome. It is therefore recommended that, where possible, councils consider climate change within the context of existing resource management, risk-assessment and policy-making processes.

The primary effect of climate change is expected to be in changing the level of risk from weather-related natural hazards. Such hazards are already addressed in district plans and in many regional plans.

Similarly, the methods available to councils to respond to the effects of climate change are generally those contained within the toolbox for natural hazard management. It is expected, therefore, that climate change effects can be assessed and managed through existing hazard management plans and/or other processes which are used to control or manage natural hazards (e.g. s106 of the RMA, s36 of the Building Act, the Long Term Plan process, and other RMA requirements to plan for natural hazards).

Responses by decision-makers to a changing climate can be classified into eight different categories (also known as 'adaptation measures'). These categories are listed below in descending order from no action to proactive response:

Responding to the effects of climate change will involve the planning sections of councils (possibly both policy and consents sections, where these are separate). A number of operational arms within a council may also need to be involved, such as those responsible for:

Strategically, a regional-local or cross-council approach is the best way to ensure that climate change is adequately considered in line with RMA requirements.

Such inter- and intra-council consideration of the effects of climate change under the RMA can also occur as part of wider planning and programming processes. Coordination will ensure the most effective strategic and cost-effective combination of response actions, including in terms of both public investment and the management of private development.

The principles for guiding the development of strategic responses are:

In the case of a coastal development project, coordination between various council sections is recommended in order to ensure climate change effects are adequately considered in:

The methods available to councils respond to the effects of climate change are generally those contained within the toolbox for natural hazard management.

There are a number of regulatory methods available under the RMA and through RMA plans, e.g. building setbacks, minimum floor areas and levels, restricted development areas, special zones or management areas, consent processes, and designations.

Outside of the RMA context, councils may use a number of other non-regulatory methods to facilitate consideration of and response to climate change effects. These include:

Individually, none of these methods will be fully effective in addressing the effects of climate change and the effectiveness of each method will vary according to the circumstances. An integrated approach, which incorporates a number of these methods, is likely to be needed. The choice of methods that are used will be determined by a number of factors, such as:

Good practice for developing strategic response frameworks for any natural hazard generally includes some or all of the following aspects. They are equally applicable for consideration of climate change effects, which are primarily linked to a changing level of hazard risk:

A risk assessment process is recommended to evaluate the level of risk from coastal hazards under a changing climate. Such an approach could be adopted for developing strategic responses to other forms of natural hazards affected by climate change, including discussions about whether a response is warranted now or can be deferred until later.